Am I holding all the aces?

Do you belong to that category of people who get super excited when they hear about celebs getting into something new? Say, for example, did you have bright eyes and bushy tail when you heard that Sonakshi Sinha is now a singer? Or did you go bonkers when Twinkle Khanna came out with her first debut novella? If yes, then please read this article at your own risk. 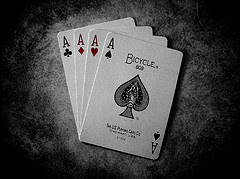 These days all I can hear or read about, is about the celebs who are bouncing off the wall and stepping into a field where probably they do not belong. Now, it is not that I am against them for this. But the only thing that blows my fuse is the “undeserved success” these celebs get just because of their name and background. If you still do not agree with me, check out Sonakshi’s debut performance at the IIFA. Just because she cannot be sent back with a flea in her ear, like all the other not-so-famous-middle-class-people, she gets praised and is put on an entirely different pedestal. Just imagine how difficult it is for a common man to get a chance to sing in the IIFA. Not only is he required to shift to Mumbai, struggle for 4-5 years, get the first break and then eventually pay a huge amount (as bribe) to get the honor of performing on the grand stage!

It all began with Shraddha Kapoor and it spread like fire in the Bollywood industry. Alia, Sonakshi and now Sallu Bhai! I wonder who is next!

Probably, the next bumper news will be like- “Shruti Hasan is the new Saroj Khan of Bollywood”. Anyway, the issue that put me in the black mood and forced me to pen down this article is related to the new non-fiction book in the market- “Mrs. Funnybones”. It is written by none other than our Twinkle. I personally love her so much (and I would also like to clear the air: I have no grudges against her and her writing style completely mesmerizes me). But the way her book came out, the way the copies went out of stock and the way people are bragging about the book is weird. It is true that her columns in “Times of India” are exceptional, owning to her sense of humor and the use of satirical punches. But I would just give a simple 3/5 to the book. Yes, it is different from what is already there in the market. But, unlike how funny others found it, I was made to smile only a few times. Probably, my IQ doesn’t go in rhyme with satirical humor!

But the main question here is that if any budding author had come up with an idea of penning down the regular nothings of his/ her life in form of a novel, then would it be as successful as this book? Perhaps, no. Why? Because then the reviewers would have stated that the book lacked the fun element, the language is too simple, the idea is not fresh and things like that. The overall rating of the book would have gone down to 2.5 or 3 on 5 and the effort would have been made in vain.

It is not my business to poke into everyone’s life and tell then to strictly abide by their profession and not opt for any avocation. But this “undeserving fame” makes me depressed. I am working on my debut novella and this forces me to rethink whether or not the book will be liked by the readers because I am no Twinkle nor Yuvraj Singh!! Blimey!!