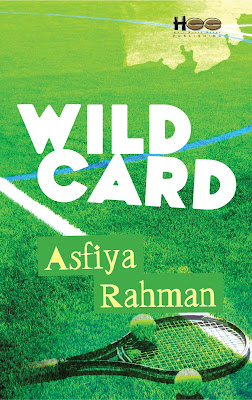 Sports has always been my passion; anything about it excites me a lot. The good thing about HBB is that they encourage different genres (other than romantic fiction). It does not matter which sport is involved but the adrenaline rush is what matters the most.

‘Wildcard’ comes as a delightful read because of the chronological approach used by the authoress to reach the climax. It is a pot-boiler that has a blend of drama, regret, helplessness, love, determination, a hankering for the lost title and the bond between a daughter and the father. The story does remind you of ‘Reel Steel’ (Excuse my growing habit of relating the books with movies) but at the same time, it has a flavor of its own. With a catchy cover and just the apt amount of green, the book doesn't fail to leave a lasting impression.

The story begins with Karan Mehrotra (the protagonist) blowing away the cobwebs and enjoying life to the fullest. He has name, fame, and money; he is the star Tennis player. Wimbledon and wedding are on cards but destiny turns the tables for Karan and forces him to give up his dream. It is eight years later that Karan gets a second bite at the cherry when his little daughter urges him to pursue his long-lost dream and be contended.

‘Wildcard’ is about a player’s endeavor to become the champion, a lover’s quest to fulfill the vows of marriage, a father’s struggle to live for his child and a man’s ‘fight tooth and nail’ attitude. Karan has the blend of all these personalities and his character shines. Balancing his character is the character of Roshni. With an impressive tone and easy to understand language, the story flows smoothly at a convenient pace. However, the only drawback is the numerous typos.

Overall, a straight-from-the-heart story. Good effort by the author.

Buy this book at:
Amazon