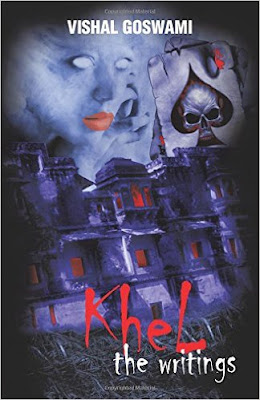 Summary
“Khel” is full of fear and anxiety. The story revolves around Sanya, who works for a reputed Newspaper and tries really hard to keep together the withering shreds of her life. Hopeless, feeble and lonely, she finds a ray of hope in the mysterious case of four deaths that happen in an abandoned Haveli. The story is a pot boiler, for it describes the efforts and the stress put up by Sanya to solve the mystery, so much so, that her own life gets highly affected by the situation. Despite being unable to stand the heat, Sanya chooses not to get out of the kitchen but fight at all costs.

But does her effort reap benefits? Or does she suffer at the hands of her own decisions?

Grab a copy soon to unveil the secrets.

My opinion
‘Khel- the writings’ is a good novella with an absurd title. Probably, the punch line was not at all required. The cover is okay. It could have been made better. Kudos to the author for putting up a good show altogether and coming up with a horror/ thriller in just 150 pages.

“If you build the guts to do something, anything, then you better save enough to face the consequences.” Sanya has been portrayed as a very strong character, who fights all odds with all her might and never takes a step backwards. The characterization of Kabir, Nawabs and other supporting people is just up to the mark. Nothing more should be (or rather cannot be) expected in a 150-page thriller/horror novella. The author seems to be a huge fan of Hollywood as majority of the scenes are inspired from horror movies like ‘Unborn’, ‘Black widow’ and many more. But the quality and the placement of scenes at appropriate places, is what wins.

There are some really long descriptions and paragraphs that may/ may not act as a turn off for some. The language is lucid and the font and style is fine. However, the proofreading and editing is bad. Time and again you can spot mistakes in punctuation and sentence formation. The blurb is too long and the font used for the same is illegible.

I especially liked the second chapter for its mystery and the flow. On the contrary, the climax was baffling. It will definitely not leave the readers gruntled. Ending a story on a loose end is different than ending a story illogically. The readers won’t be forced to ask about what happens to Sanya or Rohan or Kabir because the climax does not talk about anything except the ‘decaying stench enveloping Sanya’. And this makes the reading worthless.

Drawbacks
The major drawback in the book is the lack of proofreading and presence of several grammatical errors that makes the content ambiguous.