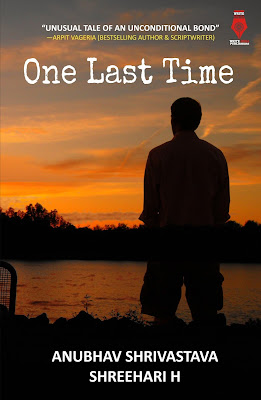 Recently, a story shared by Dan Asmussen about a rich Dad who takes his son to see how poor people live and is floored by the wisdom and compassion his son develops, is doing rounds on social media. On the same note, ‘One Last Time’ is based on the similar idea; Nakul (in early teens) is born with plenty filthy lucre. But his roots belong in the village. Owing to chance and circumstance, he visits his grandmother’s place and is overwhelmed by the life led by people there. He befriends the son of a cultivator and begins an unexpected journey of friendship that looks promising.

Like any other story, a female character is introduced in the story, Aakanksha, who joins the journey. The story takes you through a roller-coaster ride, making you reminiscence the good old days of childhood. The narration and the description makes you relive each and every memory you have of your friend (s). This part of the story is, indeed, good.
Just like how in the movie ‘Swadesh’ the character transformation plays a major role, here too, a similar theme is targeted. Nakul learns to appreciate the happiness that one gets when time is spent with the loved ones. He learns to value love, time and people. He acknowledges and learns to help others. Owing to Prakash’s strong narratives, the ideas and thoughts are conveyed unmistakably. A round character, Nakul doesn’t fail to impress the readers.

Unlike other mushy love tales, this story maintains the innocence and the essence of friendship in the right sense. However, the role of Akanksha was not justified. Either it should have been completely eliminated and a new angle could have been implemented or her character should have been given more importance.

With a subtle and non-interesting cover, ‘One Last Time’ offers the old wine in a new bottle. The blurb is fine. Often one can encounter incorrect vocabulary usage (Eg. Pg. 44 There was hardly much time left before the cab would arrive- hardly any should have been used here). A breezy read, this book can be given a chance.

Best Wishes to the author!

Buy this book at: